On March 20, 2021 in the city of Villa Alemana in Chile, a group of neighbors noticed how a thief attacked an elderly man and tried to steal his car. They did not hesitate at all, caught the thief, and tied him to an electric pole with a rope and transparent food gelatin. The police came a little later to arrest him in this situation. They discovered in the police department that he was a thief with a fairly large criminal record. 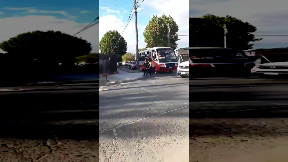 How To Stop A Car Thief