Elderly Chinese man narrowly avoids being run over by truck

An elderly man narrowly avoided being run over by a truck in eastern China.

The terrifying CCTV video, shot in the city of Wuhu in Anhui Province on April 2, shows a red truck suddenly moving when an elderly man named Zhou walking across the road.

Since Zhou was in the truck driver's blind spot, he was pushed forward by the truck.

Fortunately, Zhou ran quickly to escape being run over by the vehicle.

Since the speed of the truck was not fast, Zhou reportedly only suffered minor injur 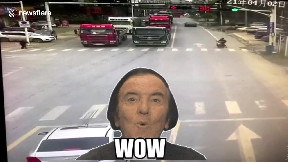