'We are now in crisis mode': Mayor of Florida county home to Disney World sounds alarm on surging Covid cases

The mayor of the Florida county that's home to Disney World and Universal Studios is sounding the alarm on a spike of Covid-19 cases in the area, saying the county is now in "crisis mode" as it grapples with its worsening infection rate.
"These numbers are extraordinary. We are seeing nearly 1,000 new cases in Orange County daily. Those are the numbers we saw at the highest peak last year," Mayor Jerry Demings, a Democrat, said Monday during a news conference. "So a thousand a day is extraordinary. We are now in crisis mode."
Urging the county's residents to get vaccinated, Demings added: "We, as a community, need to work together to slow the spread."
"Residents are still getting vaccinated, but at a slow pace. We need to move the needle faster. 61.59% of Orange County residents ages 12 and above have had at least one shot of the vaccine," he said.
The comments from the mayor come as Florida is seeing a surge in coronavirus cases, with every county in the state listed as having "high" levels of community transmission, according to data from the US Centers for Disease Control and Prevention.
CNN has reached out to Disney for comment.

Orange County hosts not only Walt Disney World and Universal Studios Orlando Resort, but also SeaWorld Orlando. The parks dropped many of their pandemic-era rules in recent months, including temperature checks for guests. Fully vaccinated guests do not need to wear face masks in the parks, and while Universal isn't requiring social distancing among visitors, its website says the park encourages "all guests to keep a safe distance between travel parties."
Over the past week, Florida accounted for nearly a quarter of all new cases in the United States -- more than any other state.
The case rate in the state over the past week -- about 49 new cases per 100,000 people each day -- is more than three times the US rate of about 16 new cases per 100,000 people each day. Only Arkansas and Louisiana had higher case rates over the past week.
Florida also reported more Covid-19 deaths than any other state over the past week -- a total of 282 over the past week -- the sixth highest per capita rate of deaths in the country.
The state has fully vaccinated 48.5% of its residents, according to data from the CDC -- below the US rate of 49.1%. 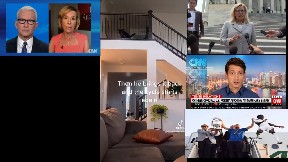