This is the shocking moment an explosion rocked the port of Lebanon's capital city, Beirut, one year ago today.

This extended 10-minute, HD-quality video was recorded by Agoston Nemeth at 6pm local time on August 4, 2020. The video filmed by the 42-year-old therapist from Budapest, Hungary, shows loud rumbling, as black smoke engulfs the sky, before a huge mushroom cloud and visible blast wave blows out the windows, rushing towards the camera and knocking it over.

Nemeth's footage was captured on the terrace of his home, on the 13th floor of building next to St George Hospital, only 850 meters from the explosion.

At the time, he told Newsflare: &amp;quot;That evening, I heard some firework type of noise. It's not unusual here in Lebanon, but it was so intense, so loud that I went out to the terrace. I noticed flames and in a warehouse in the port. I heard them first, like the sound of small fireworks. It was about 5.40 pm, and I went out and took some pictures from the terrace. I thought the firefighters would arrive soon, and I wanted to record them coming and put out the fire. I left my iPhone outside on the terrace, propped up on a handrail, and left it recording at around 5.50 pm.

&amp;quot;At 6pm I had my therapy session with a client. Five minutes after I started the session, I heard a bigger explosion. I noticed it had escalated, so I told my client to stay there, and I checked the explosion. I was getting nervous. I went out with my camera, and I noticed it was getting bigger and bigger, some huge flames came out and suddenly there was this, 'boom.'

&amp;quot;It was something I could not get away from. I experienced this white-hot glass exploding. I don't know if I jumped or the shock waves pushed me, and I found myself on the floor. I don't know how much time passed. I noticed shattering glass and people screaming. I looked around and saw this huge orange cloud above me.

&amp;quot;Then I stood up and took some pictures and video. I didn't know if the building would collapse. Shortly after my fiancé called me, she was four or five kilometers away but also felt the blast around her.&amp;quot;

Nemeth also told Newsflare about his now damaged apartment, that he has lived in since January 1, 2019, with his Hungarian fiancé, who works for an international organisation.

&amp;quot;After the blast, I saw our apartment completely demolished, completely destroyed. Clothes, books, the bed, furniture - everything mixed with glass,&amp;quot; he said.

&amp;quot;On August 6 we went back to the apartment to rescue some stuff. I saw the table on the terrace - there was one piece of glass inside the tabletop that was one centimetre deep. When my fiancee arrived she could see the metal elevator door was displaced. And I saw the walls and stairs had blood, hand marks with blood, people were all over the place injured. I could smell blood. My apartment is still in pieces now, three days on.&amp;quot;

Nemeth continued: &amp;quot;Once you visit Lebanon, you fall in love with it. I cannot pinpoint one thing, its the whole thing. It's terrible. I'm in shock, the first day I was in 'doing' mode. I was so active I couldn't even sleep, maybe two hours. The next day I was very active, but I was completely numb. I had to check my whole body to see if it hurt. I started to realise how lucky I was when I saw the glass stuck in the table. And now I feel guilty. Not everybody was that lucky. I was extremely lucky to be this close but didn't get hurt at all. I have some bruises in my shoulder but that's all, most likely from when the blast waves pushed me to the ground.&amp;quot;

At least 200 people were killed in the explosion and more than 5,000 residents were injured. 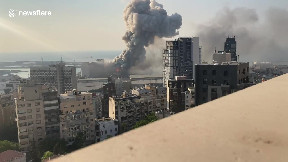