A motorcycle rider waited for the road to become clear only to accidentally lose control and crash straight into the bush.

Footage shows a motorcycle rider wobbling across the road before disappearing behind the plants on a mountain road in Melaka, Malaysia on March 3.

His friend, Muhammad Afiq, said the rider was fine but he had a few scratches when he fell from the motorbike.

He said: ‘We should have practised somewhere without cars and people. I think it would have been safer.’ 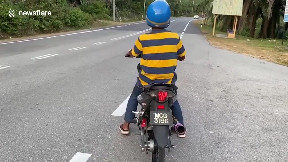