A callous rickshaw driver got some instant karma after crashing while trying to lean over and kick a stray dog in India.

The accident took place on May 16 in Bazar Peth area of ​​Pune, Maharashtra. CCTV footage shows the driver can be seen leaning out of the moving rickshaw with his foot before swerving and striking the divider.

The driver was thrown from his vehicle, suffering injuries from landing on the road. Bystanders on the other side of the road saw the out-of-control vehicle caught up to halt it.

Fortunately there was no oncoming vehicle in the other lane, so further accidents were avoided. 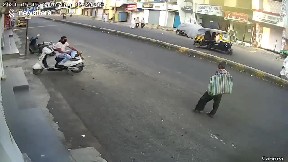