This Judge!: Criminal Tries to Attack Judge, Gets Learnt

Pike County, Mississippi -- Sidney Newsome, 27, was in court charged with domestic violence. When things weren't going his way, Newsome decided to prove he wasn't violent at all by attacking the judge. Chaos ensues as family and friends join in but Judge Aubrey Rimes joined in better and sorted the matter out.

Rimes charged Newsome with contempt of court and Chief Sheriff’s Deputy Brad Bellipanni said he will probably be charged with simple assault. 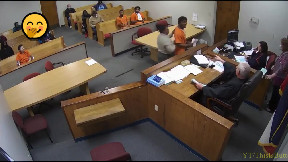