Detroit, Michigan - In an incident oddly similar to an earlier accident in late 2019, a Detroit fire truck was hit by an SUV and plowed into a gas station at Dequindre and State Fair Wednesday night, injuring seven people including three firefighters.

A Lincoln Navigator crashed into the rig at the intersection sending it careening into the gas station pumps, striking another vehicle before coming to a rest in front of the station store. 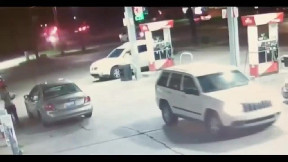