Concrete mixing truck swallowed by sinkhole as it drives on a road in Voronezh, Russia

Drivers in Voronezh, Russia, got a shock when a concrete mixing truck in front of them was swallowed by the road on 18 October 2014.

Footage of the incident was captured on a driver's dashcam, showing the huge lorry largely disappearing in just a few seconds.

The incident happened when the vehicle stopped at an intersection in the town and a hole suddenly appeared beneath it.

As a result, the road was closed for a month

According to the prosecutor's office, the sinkhole formed above a sewer. 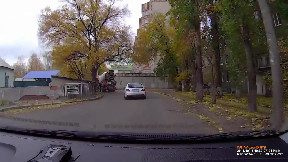