55   Non-fatality Dukes of Hazard Launch on an overpass berm!

A shocking car crash in Yuba City was caught on a truck’s dashcam video which shows a vehicle flying through the air before slamming into the road below.

Shocking screams could be heard from the family in the truck as they looked on as the car catapults off Highway 99.

The vehicle slammed head-on into the ground and rolled over a couple of times before coming to a rest on its roof. Debris from the crash covered the roadway as the truck that captured the crash on its dashcam quickly came to a stop.

The woman behind the wheel survived, but that’s not the only miracle. 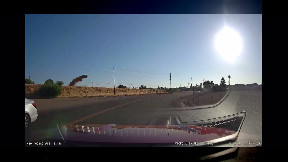