Two cars fell off a 6-metre-high raised road after a collision in southwestern China.

The CCTV video, captured in the city of Chuxiong in Yunnan Province on June 10, shows an SUV smashing into a parked car and pushing it down a 6-metre-high platform, before falling off the platform itself.

After the police arrived, they rescued the motorist. Since she wore a seatbelt, she was not injured seriously.

The incident was caused by the motorist's misoperation. The case is under further investigation.

The video was provided by local media with permission. 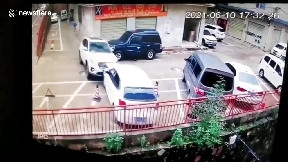