A man in Liverpool, UK, had a hilarious reaction after he was dared to lick an electric insect killer.

After finally plucking up the courage, he touches the bug zapper with his tongue which triggers an electric shock.

The filmer and their mates all burst out into laughter at the guy's shocking reaction.

This footage was filmed on July 10. 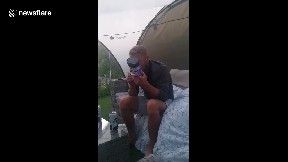