That is a very brave Mama helping her beloved fleabags

A California teen girl got the scare of her life after a bear attempted to break into her back yard, but she managed to shove the wild animal off her wall in a move to save her dogs.
In the clip a bear is seen walking atop the yard's wall at a home in Bradford, California, with cubs in tow, while a group of pet dogs attempt to fight it off.

The wild animal paws menacingly at one of the dogs while her cubs scamper away, right as 17-year-old Hailey Morinico rushes to her dogs' rescue.
The pet dogs attempt to scare off the bear, but to no avail - until she intervenes.
She said she heard the dogs barking and went to tell them to stop, but when she did so she was hit with a rude surprise.
In a true fight-or-flight moment, the teenager daringly approaches the fully grown adult black bear and pushes it off the wall before immediately gathering her pets and going inside. 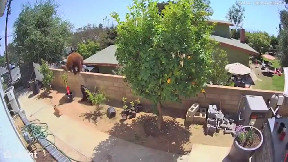