A Ragdoll cat got revenge on a young girl by using its behind to knock her down after the girl accidentally kicked it in southern China.

The funny video was filmed in the city of Guangzhou in Guangdong Province on June 13.

The 1-year-old girl accidentally kicked the cat when she was trying to find her toy.

After the girl walked away, the cat then ran to use its butt to knock her down deliberately.

The video was provided by local media with permission. 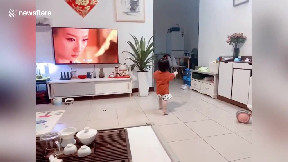