Robbers of a high-value robbery in Amsterdam fleed by car and ended up in a town called Waterland. They burned their cars when they had the time and fleed by foot. They ended up on a field while police was arriving at the location, that was given by the helicopter. Shooting started from the robbers to the police, and police reacted with gun fire. One robber died on the scene. And two other suspectsgot injured. 4 other suspects got arrested.
The value of the loot was 50 milion euros on gold and diamonds. 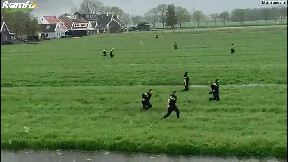