In Russia, the Ural Owl is quite common, but in general, within the boundaries of its range, it belongs to rare and protected species. It is interesting to note that over the 20th century, the Ural Owl, unlike other large owls, increased its numbers. Since the 1950s this owl is clearly expanding its range in a southwesterly direction. This can be seen as a sign of well-being or even prosperity of the species. 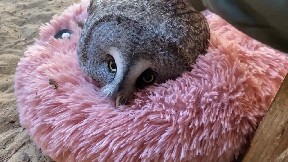