A car knocked down a booth with a security guard inside after a motorist accidentally pressed the accelerator in southern China.

The video, filmed in the city of Shenzhen in Guangdong Province on June 19, shows a woman entering a white car stopped at the entrance of a residential community.

After accidentally pressing the accelerator, the motorist sped into the booth.

The security guard was then seen coming out of the collapsed booth by herself.

According to the property management, the motorist might have been nervous and pressed the accelerator by mistake.

The security guard suffered fractures and the security booth is being repaired.

It will take 15 days to repair the security booth and the entrance has been closed temporarily.

The case is under investigation. The video was provided by local media with permission. 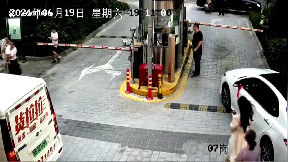