The green in front of the UK's Houses of Parliament hosted separate pro-democracy protests for Myanmar and Belarus on Sunday 8 August.

The Myanmar protesters gathered to commemorate the 8888 uprising in Myanmar, started by students in Yangon on 8 August 1988, but also to condemn the country's latest return to military rule.

Thousands of deaths were attributed to the military during the '88 uprising, during which Aung San Suu Kyi emerged as a national icon.

Belarusian protesters also staged a demonstration against the authoritarian regime in their country, which is often referred to as 'Europe's last dictatorship'.

The area has long been a popular gathering place for protests. 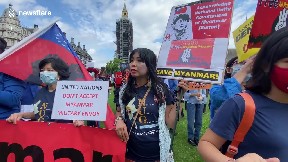